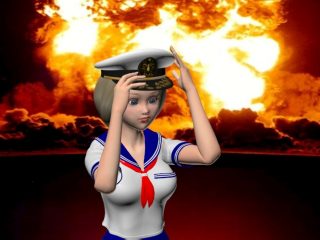 END_OF_DOCUMENT_TOKEN_TO_BE_REPLACED

A major update for A.I. Invasion was just released.

This update brings a new mission to the table and contains a new location to discover: The A.I. space station! Additionally, the game now fully supports gamepad control!

In the mission players will leave solid ground behind and infiltrate an A.I. space station orbiting through the planetary system.

END_OF_DOCUMENT_TOKEN_TO_BE_REPLACED

After more than 20 years as musical producer and DJ, Dr. Kucho!, tired of those fake DJs who are dominating the music scene because of the money they use to promote themselves, uses his programming knowledge to create the video game “Ghosts’n DJs” and spread some justice around (in a virtual way).

Inspired on Ghosts’n Goblins, Ghosts’n DJs keeps the feeling of the classic arcades: precise movement, quick action, retro graphics with big pixel, CRT screen simulation… on the other hand, the monsters you have to fight are not retro at all: Devil Gueta, Steve Sushi, Paris Sheraton, Pauly Douchebag and Pitbullshit. To defeat these evil creatures you count on physical music supports such as vinyls, CDRom, pen drives and tapes as weapons.

The video game, which is still in progress, was launched on Kickstarter crowdfunding platform the 16th October, the same day of the Madrid Games Week fair public release and where Ghosts’n DJs won the second prize as Best Indie Game voted by the audience.

The Project is on: kck.st/1vilzMs